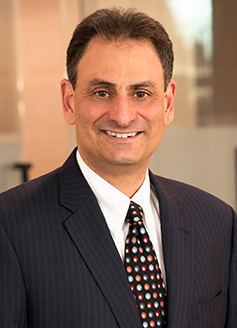 At Robinson, Waters & O’Dorisio, Hal specializes in franchise and intellectual property litigation and arbitration. He also has a wide range of experience in trademark registration and commercial litigation.

Hal is admitted to practice law in Colorado and the District of Columbia as well as the United States Courts of Appeals for the 1st, 4th, 9th, 10th and Federal Circuits.

Hal is listed in Best Lawyers in America® for Franchise Law and was selected as the 2016 and 2018 “Lawyer of the Year” for Franchise Law in Denver. He has also been recognized as a Super Lawyer® in both franchise law and intellectual property litigation since 2010 and has earned an AV rating from his peers through Martindale-Hubbell. Furthermore, he is an approved arbitrator with the American Arbitration Association. He is a member of the American Bar Association’s Intellectual Property Law Section, the ABA Forum Committee on Franchising, the International Trademark Association and the South Asian Bar Association. Hal was President of Temple Micah from 2007 to 2009 and volunteers for the Rocky Mountain Immigration Advocacy Network.

James and Eby v. Taco John’s International, Inc., ___ P.3d. ___ (Wyo. 2018) – trial court summary judgment affirmed in favor of franchisor client on claims of two former executives for breach of employment contracts.  The assertion by executives that there was apparent authority for their prohibited actions based on verbal assurances from the president of the company was defeated because the executives could not reasonably rely on such approval when their contracts required amendments to be in writing.

In Re Potts, 2013 Bankr. Lexis 4164 (Bankr. Colo. 2013) – successfully defended secured creditors against claim by another creditor that debt of bankrupt was a gift.